I kind of miss H. Ross Perot. Whether you thought he would have made a good President or not, the man sure knew how to explain complicated issues to the public.

It’s also a bit strange for me to look back on this debate from 1992. I was only 12 years old at the time, but I followed politics even then along with my parents. Now, nearly 24 years later, we’re still debating many of the same issues we were debating back then.

Back in 1992, Perot described health care (he really meant employer-sponsored private health insurance) as “the most expensive single element” in making a car in the United States. And if he thought it was expensive then, just imagine what he would think now.

It’s obvious that we’re spending a considerably larger share of our economy than ever on health care. That in and of itself is concerning, but what is even more troubling is how much of it we are wasting. A 2012 report by the Institute of Medicine estimated $750 billion in waste in the U.S. health care system in 2009 alone…nearly 1/3 of total health spending that year.

That’s right — out of every $3 we spend on health care, we’re throwing $1 right in the trash. Actually, it’s worse than that because many of those wasted dollars on unnecessary treatments have actually cost people their lives.

The responsibility for building a continuously learning health care system rests on many shoulders because the stakes are high. As the IOM committee reports, every missed opportunity for improving health care results in unnecessary suffering. By one estimate, almost 75,000 needless deaths could have been averted in 2005 if every state had delivered care on par with the best performing state. Current waste diverts resources; the committee estimates $750 billion in unnecessary health spending in 2009 alone…

…The entrenched challenges of the U.S. health care system demand a transformed approach. Left unchanged, health care will continue to underperform; cause unnecessary harm; and strain national, state, and family budgets. The actions required to reverse this trend will be notable, substantial, sometimes disruptive—and absolutely necessary.

In the U.S., there are almost as many different types of health coverage as there are patients. Even within the same insurance company, there are numerous variations from policy to policy. When I worked for a major health insurer, I answered calls from our insurance members but also from physician office and hospital staff who were contacting us just to verify a patient’s benefits, from whether the patient still had insurance to deductibles to coverage exclusions. They had learned that insurance cards weren’t always current or specific enough, so they had to call us one patient at a time because everyone was different…just to make sure they got paid.

Does that sound like an efficient system to you?

It’s a problem they don’t have to deal with in countries with single-payer  health systems…like Canada.

Reducing US per capita spending for hospital administration to Scottish or Canadian levels would have saved more than $150 billion in 2011. This study suggests that the reduction of US administrative costs would best be accomplished through the use of a simpler and less market-oriented payment scheme.

Himmelstein, et al. A Comparison Of Hospital Administrative Costs In Eight Nations: US Costs Exceed All Others By Far. Health Aff September 2014 33:91586–1594;

There’s a massive problem ahead that our political leaders are all dancing around: Medicare.

Sure, it comes up in broad terms from time to time…

But whenever someone proposes a plan to do something about it (or, in the case of Obama, actually passes a law that affects it), they pay a heavy political price.

Why is this such a toxic issue for politicians of all stripes? Why are they walking on eggshells? Because, unlike younger adults, a lot of senior citizens show up and vote on Election Day.

Medicare and Medicaid together: Dual eligibles

One thing that often goes overlooked in the discussion of Medicare is its peculiar relationship to Medicaid. Primarily because Medicare does not include room and board coverage for long-term residential care (i.e., nursing homes), elderly and disabled people who need long-term care are forced to spend their resources out of pocket. Many people are forced to sell their homes in order to pay for long-term care.

When those resources are exhausted (and they often are), Medicaid kicks in. As of 2008, there were 9 million “dual eligibles” in the United States — people who were on both Medicare and at least some level of Medicaid. 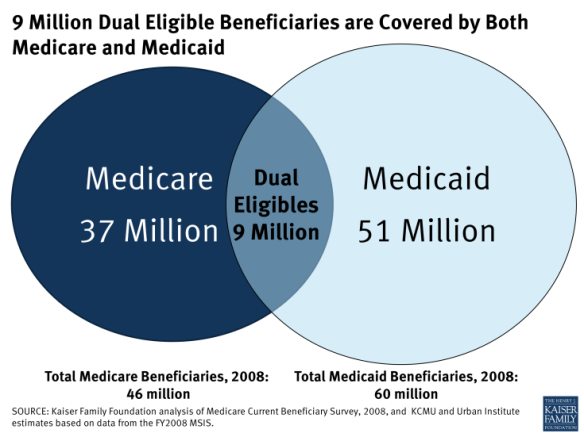 As of 2008, there were 9 million “dual eligibles” receiving both Medicare and Medicaid benefits.
Source: The Henry J. Kaiser Family Foundation.

The good news from Obamacare

The Patient Protection and Affordable Care of 2010 (aka Obamacare) did make $716 billion in cuts to Medicare, especially with regard to waste, fraud and abuse as well as overpayments to private insurers that participate in the Medicare Advantage program. Yet PPACA actually enhanced benefits for Medicare beneficiaries (specifically for preventive care and prescription drugs) and extended the solvency of Medicare.

As of their most recent report, the trustees for Medicare and Social Security estimate that the Medicare Hospital Insurance (Part A) Trust Fund will remain solvent until 2030.

If there has been one consistent message from Republicans for the last several years, it’s that they want to repeal Obamacare. Doing that would actually bring the Medicare Trust Fund to insolvency much faster.

Just looking at the far-distant insolvency date of the Medicare Trust Fund could lead to a false sense of security in the meantime. But the fact that there is an insolvency date at all means the program is unsustainable as it is currently designed.

It’s conventional wisdom that Medicare is funded entirely by the Medicare payroll tax and the premiums paid by those opting into Parts B (physician care benefits) and D (prescription drug benefits). But, in 2013, the Medicare received $237.7 billion in “general revenue,” that is, from the government’s general fund while only taking in $220.8 billion from Medicare payroll taxes. Even with that sizable extra bump, the program still spent $7.1 billion more than it took in. When people talk about the “Medicare Trust Fund,” they are specifically talking about the fund for Part A hospital insurance (HI). Part B and Part D are funded by the Supplemental Medical Insurance Trust Fund (SMI).
Source: 2014 Medicare Trustees Report

Just how big a problem is this?

In 1974, federal government expenditures on major health care programs accounted for 1 percent of gross domestic product. They have already ballooned to 4.8 percent and are projected to expand further to 6.1 percent by 2024 unless we change something.
Source: Congressional Budget Office. The Budget and Economic Outlook: 2014 to 2024

It’s gargantuan. It’s far bigger and more urgent than the crisis facing Social Security, defense spending or any of our other social programs.

In a future post, I will examine just how we got to this point, what solutions have been proposed, and the pros and cons of each.