Unfortunately, even after PPACA, Americans are still drowning in debt from medical bills. And many of those drowning are people with private health insurance.

The key thing in a health savings account is you actually put a patient in charge of his or her decisions, which we think is a vital aspect of making sure the health care system is not only modern but a health care system in which costs are not running out of control. When you go buy a car, you know, you’re able to shop and compare. And yet in health care that’s just not happening in America today.

In 2003, President Bush signed the Medicare Prescription Drug, Improvement, and Modernization Act into law. Along with the many provisions of the law directly related to Medicare (most notably the creation of the Medicare Part D prescription drug program), the law also affected people using private health insurance by creating new rules for health savings accounts and high-deductible health plans.

Without going into all of the ins and outs of how health savings accounts work, the promise behind them was to make health insurance behave more like other forms of insurance — that is, for major costs only as reflected by a high deductible. The ordinary medical expenses would be funded through a tax-deductible savings account that rolled over from year to year. This would supposedly create more rational markets and price transparency for routine health services.

Employers jumped at these new high-deductible health plans because they were relatively inexpensive to provide for their employees.

Obviously with less than half of HSAs receiving any employer contribution, just over half receiving any personal contribution, and those contributions typically being less than the deductible amount, these high deductibles became barriers to accessing health care services for many people. Even emergency services, especially for men. None of this should have been a surprise.

But then a funny thing happened. With such high deductibles, patients became more and more cognizant of when they were met and when they rolled over. If an expensive non-emergency medical procedure covered by health insurance could be postponed until the end of the calendar year when the deductible was closer to being met (or fully met), those procedures were postponed. But those procedures weren’t eliminated — they just piled up in December when it made the most financial sense for the patients given the rules of their health insurance plans.

As the growth of the high-deductible insurance plans comes into play, we see more seasonality in elective surgery. People with high deductible plans want to have less done at the beginning of the year.

And those end-of-year appointments start filling up months in advance. In other words, there are those much-maligned “waiting lists” driven not by the government officially rationing care, but by patients, employers and health insurance companies.

We still have health care rationing in the United States, but it’s based on price, income and arbitrary benefit periods instead of clinical concerns. Even in the new world of the Patient Protection and Affordable Care Act, many of these issues remain.

There’s a massive problem ahead that our political leaders are all dancing around: Medicare.

Sure, it comes up in broad terms from time to time…

But whenever someone proposes a plan to do something about it (or, in the case of Obama, actually passes a law that affects it), they pay a heavy political price.

Why is this such a toxic issue for politicians of all stripes? Why are they walking on eggshells? Because, unlike younger adults, a lot of senior citizens show up and vote on Election Day.

Medicare and Medicaid together: Dual eligibles

One thing that often goes overlooked in the discussion of Medicare is its peculiar relationship to Medicaid. Primarily because Medicare does not include room and board coverage for long-term residential care (i.e., nursing homes), elderly and disabled people who need long-term care are forced to spend their resources out of pocket. Many people are forced to sell their homes in order to pay for long-term care.

When those resources are exhausted (and they often are), Medicaid kicks in. As of 2008, there were 9 million “dual eligibles” in the United States — people who were on both Medicare and at least some level of Medicaid.

As of 2008, there were 9 million “dual eligibles” receiving both Medicare and Medicaid benefits.
Source: The Henry J. Kaiser Family Foundation.

The good news from Obamacare

The Patient Protection and Affordable Care of 2010 (aka Obamacare) did make $716 billion in cuts to Medicare, especially with regard to waste, fraud and abuse as well as overpayments to private insurers that participate in the Medicare Advantage program. Yet PPACA actually enhanced benefits for Medicare beneficiaries (specifically for preventive care and prescription drugs) and extended the solvency of Medicare.

As of their most recent report, the trustees for Medicare and Social Security estimate that the Medicare Hospital Insurance (Part A) Trust Fund will remain solvent until 2030.

If there has been one consistent message from Republicans for the last several years, it’s that they want to repeal Obamacare. Doing that would actually bring the Medicare Trust Fund to insolvency much faster.

Just looking at the far-distant insolvency date of the Medicare Trust Fund could lead to a false sense of security in the meantime. But the fact that there is an insolvency date at all means the program is unsustainable as it is currently designed. 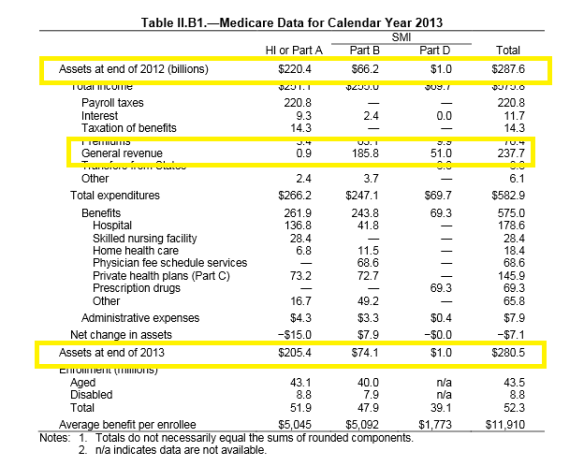 It’s conventional wisdom that Medicare is funded entirely by the Medicare payroll tax and the premiums paid by those opting into Parts B (physician care benefits) and D (prescription drug benefits). But, in 2013, the Medicare received $237.7 billion in “general revenue,” that is, from the government’s general fund while only taking in $220.8 billion from Medicare payroll taxes. Even with that sizable extra bump, the program still spent $7.1 billion more than it took in. When people talk about the “Medicare Trust Fund,” they are specifically talking about the fund for Part A hospital insurance (HI). Part B and Part D are funded by the Supplemental Medical Insurance Trust Fund (SMI).
Source: 2014 Medicare Trustees Report

Just how big a problem is this?

In 1974, federal government expenditures on major health care programs accounted for 1 percent of gross domestic product. They have already ballooned to 4.8 percent and are projected to expand further to 6.1 percent by 2024 unless we change something.
Source: Congressional Budget Office. The Budget and Economic Outlook: 2014 to 2024

It’s gargantuan. It’s far bigger and more urgent than the crisis facing Social Security, defense spending or any of our other social programs.

In a future post, I will examine just how we got to this point, what solutions have been proposed, and the pros and cons of each.